This comes in various guises.

The name sirloin covers steak from the upper side of the true sirloin, wing rib and fore rib.

Beef for Stewing and Braising

These cuts are also suitable for salting and boiling.

Beef for Grilling and Frying:

Fillet, rump and sirloin. But the names for steaks can be confusing: Rump steaks: (rumsteck in French): these are thick (about 2 cm / 3/4 inch) slices cur across the grain of the rumps, and then, if for individual servings, cut into smaller, neater pieces. 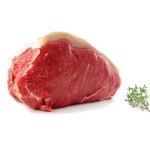