October 3rd is National Potato Day; a day to celebrate the spud.  Not the most glamorous of national days perhaps, but despite the fact that it is probably a promotional notion dreamt up by potato growers, why shouldn’t it have its own day?  There was a time in Ireland when every day was National Potato Day but the world has evolved and pasta, rice cous cous and a host of other grains have muscled in on the potato’s patch.  Also the spud’s criminal association with its fiendish friend, BUTTER, hasn’t helped its reputation in the health conscious and fat fighting communities.  It’s high time someone spoke up for the spud and even the dairy company that it keeps.  It’s time we stopped vilifying a perfectly good food and enjoyed its versatility.  Here’s to National Potato Day; I declare myself a supporter.

Potatoes have been part of European cuisine for a few centuries now.  In Ireland we have the legendary Sir Walter Raleigh to thank for bringing us the first spud.  Where would the Sunday Roast be without at least one side dish of some sort of potato, be it roast, mashed, croqueted or all three in some excessive cases.  What would have become of the fish had we not put it together with the chip? 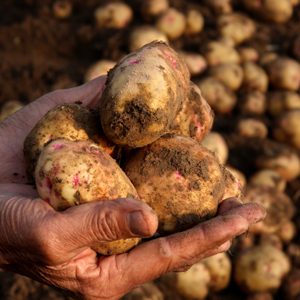 The potato originated in South America and at first was thought of as an ornamental plant.  Once its true value was discovered it was hard to believe how tasty, versatile, economical and nutritious the yield could be.  A potato has good levels of Vitamin B and C, is a good carbohydrate and a good source of iron and potassium along with other minerals.  There’s no fat in the potato and due to its dense nature it can fill you up.

Various varieties have been created so throughout the year we can also enjoy the subtle differences in taste and texture.  I always look forward to the new potato but equally I can enjoy a plate of winter mash or a large jacket potato baked in the oven.  Some varieties are better for chips and others are ideal for salads.  Whatever your preference, floury or waxy, there is a potato variety for everyone.

Before the advent of the fridge many people stored spuds in a potato box in a darkened cellar or a shed.  If you have such a place (that’s not centrally heated) then you could still do it.  Ideally you can keep potatoes in your fridge and they will last but I think it’s best to use them relatively quickly once you’ve bought them.

Having mentioned all the good and virtuous things about potatoes it’s time to move on to something a whole lot sexier. You’ve probably guessed already that some of my favourite potato dishes involve a whole lot of fat; oh yes when the spud hooks up with a little dairy or fat, either animal or vegetable, it means a good time for all. Goose fat, dripping, olive oil, sunflower oil, butter, milk or cream all work well.  (If you find yourself frothing at the mouth because I mentioned the ‘F’ word or finding the above akin to food porn then stop reading now, it’s about to get a whole lot worse.)  They could take me out and whip me before I’d ever suggest that creamy mash can be achieved with anything other than full fat butter and full fat milk. There, I’ve said it.  Forget all your substitutes, let’s just do it properly and indulge.  If you’ve ever wondered how high end restaurants achieve excellent lump free mash or ‘Potato puree’ as it often appears on the menu, well some use butter, milk and an egg yolk and sometimes even a sneaky spoon of sugar.  For perfect potato puree try the following.  Boil the potatoes in their skins in salted water for about 20minutes.  Pour off the water, drain and peel.  Mash them, or preferably, put them through a potato ricer.  Put the mash back into the saucepan and for every kg of potato (uncooked weight) use 30g butter, 250 ml milk and 1 egg yolk.  Stir all of these ingredients into the potatoes over a low heat.  Add the salt, sugar (about a tablespoon per kg) and a little nutmeg at the end to season and if you want to really achieve excellent puree then beat the whole lot with a metal whisk.

Another favourite of mine is Potato Gratin.  (I can hear the sharp intake of breath from fat fighters).   Creamy, garlic-y, thinly sliced potatoes are always indulgent and seem to be an all time favourite.  There are many different recipes for this but I like to use a mix of full fat cream, crème fraiche and an egg all mixed together and poured over the thinly sliced potatoes and fresh garlic.  I slice the potatoes quite thin.  Despite some recipes saying 30 minutes I think this needs about 45 minutes at 180 in order to cook the potatoes properly.

The Spanish have taken the egg and potato mix to its zenith with the Spanish Tortilla.  Exploring what other cultures do with potatoes is always a revelation and I would certainly encourage you to do so.  I hope this has inspired you to revisit the spud, enjoy National Potato Day and whether it’s a simple chip or a lovely roast spud don’t forget to pop into James Whelan Butchers in Oakville or stop by our website online and pick up something nice to go with it. www.jameswhelanbutchers.comWe hope you enjoyed reading this post by Pat Whelan of James Whelan Butchers. Pat is a 5th generation butcher, cook book author and the director of  James Whelan Butchers with shops in Clonmel, the Avoca Handweavers Rathcoole and Kilmacanogue, Dunnes Stores Cornelscourt, Rathmines and Swords in Dublin. Sign up to our newsletter for more updates from James Whelan Butchers