It’s hard to believe that some of our most common and versatile foods today were once viewed with great suspicion and sometimes grown purely as ornamental garden fruit because they were thought to be fatally poisonous. For a long time this was the story of the common tomato. There it sat, ripening on the vine, colouring various gardens and lying uneaten as it was believed that the acid in the seeds would kill a man in minutes. The tomato has come through a great deal of bad press and has had several names to boot; wolf peach, scarlet apple, golden apple and love apple were all common monikers for what we know today as the tomato. The latter was given by the French, pomme d’amour, who decided that not only were tomatoes non poisonous but, rather, an aphrodisiac! The PR campaign had definitely worked and today the tomato is considered among the healthiest foods available to man. In the kitchen it is also a lifesaver to many cooks.

In botanical terms tomatoes are considered a fruit but we tend to look at them as a savoury rather than a sweet food. Tomatoes are rich in vitamins C and A, both of which have potent antioxidant properties and are immensely beneficial to health. They contain many other vitamins along with minerals and necessary amino acids. There are several studies ongoing into their curative qualities, particularly in the area of cancer fighting drugs, and already many scientists agree that eating tomatoes as part of a daily diet is to be recommended. 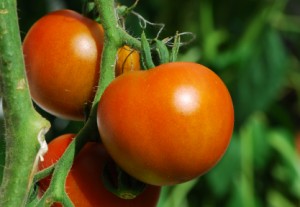 While I am a great fan of tomato based sauces and soups I also can’t resist a fresh vine ripened tomato. I love the smell, the texture and one of my favourite things to do is to deseed and dice a tomato, add a little olive oil, a little fresh chopped coriander, a pinch of salt and pepper and then load it all onto a round of toasted French stick with garlic butter. I have this for supper or I often serve it as a starter, particularly if there is a hint of an Italian or Mediterranean flavour to the menu. My family has come to regard this as a great snack option. I’m delighted because it is healthy and from the cook’s point of view it requires simple assembly rather than culinary skill or effort. If you have some of the chopped tomato mix left over use it as a dressing with some rocket and cucumber and that, along with a just cooked steak and a nice glass of red makes a terrific dinner.

Buying good tomatoes can be tricky. There are literally hundreds of varieties and sometimes the supermarket versions can be generic, tasteless offerings that are an insult to the sweet and distinctive fresh almost peppery smell of a tomato still clinging to the vine that gave it life. I personally prefer to buy them on the vine even if I have to let them ripen at home. The other thing about tomatoes is that most people store them in the fridge. This is probably the worst place for tomatoes. Tomatoes love the warmth and being kept in the cold can destroy their flavour. Keep your potatoes in the fridge and your tomatoes in the vegetable basket. If you do need to ripen some tomatoes I suggest putting them in a brown paper bag and out of direct sunlight. Check them after three days, but they could take up to four days to ripen fully.

Whether chopped and eaten as part of a salad or sliced and baked on the top of a pizza or a deep set quiche, the colour and taste of the fruit is a great addition. You could just adopt the Mediterranean way and on a big plate slice some beef tomatoes and lay out, layer with slices of mozzarella, add a few black olives, drizzle the whole lot with olive oil and sprinkle over some fresh basil and oregano, bring to the table and dig in.

My store cupboard is never without tins of peeled plum tomatoes, but again I would say you get what you pay for. Pay a few cents extra for a tin of good tomatoes and you will notice a difference. The bottom of the range varieties tend to be more watery in my experience. What I have found in the past is that I sometimes had to use two of the cheaper tins to gain the right consistency. Essentially this can be false economy as one tin of the better quality would have sufficed. However do check around and once you have found a brand you like stick with what works best for you. 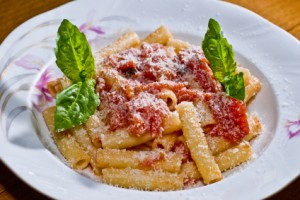 Finally I suppose it would be hard to think of the tomato without giving mention to the great tomato festival held annually in Spain, known as Tomatina. When it came to mind I had a quick look on You Tube and there it was, in all its slippery, wet glory; the world’s biggest food fight that rapidly turns into streets of human tomato stew with thousands of bodies writhing around and trying to retain their balance amid the mess and mayhem. I’m trying to decide which Spanish tradition is crazier – the Bull Run of Pamplona or the Tomatina Festival in Bunol near Valencia? Obviously the risk to life is greater in the former, but I would imagine that injury is also quite likely at Tomatina. I almost understand the adrenalin rush that drives the Bull Run, but I am totally puzzled at the appeal of Tomatina. However as a spectacle I encourage you to have a look for yourself. If for no other reason to be thankful that you don’t live in a small sleepy town where once a year up to 40,000 people gather to hurl tonnes (and I mean tonnes) of overripe tomatoes at each other!

For good tomato inspiration visit the recipes on our website where you will find plenty of choice such as Italian Sausage Spaghetti, Penne with Spicy Tomato Sauce and Sizzling Bacon or how about Bacon Baps with Scrambled Eggs and Tomato Chilli Jam to name a few; and of course it is all free and available 24/7 at www.jameswhelanbutchers.com

This post was written by me, Pat Whelan, owner of James Whelan Butchers and a passionate advocate of local artisan food. My family have been producing quality Irish Angus beef for generations using a traditional dry aging process. This tradition is one that I continue to practice at our abattoir on our family farm in Garrentemple, Clonmel. These posts aim to impart some of the wisdom to readers and help them get the best out of the meat they eat! Our meat is available online here! I welcome your feedback to Pat@jwb.ie