I received a glorious gift of fresh carrots from a friend’s garden last weekend and decided to make carrot and coriander soup. Once October hits I love making fresh soups for these cooler days and I always feel very smug indulging in something so irresistibly tasty, safe in the knowledge that it is so virtuous. As I prepared everything for the pot, including one large potato, I was struck by how much we take the humble spud for granted. The onion is of course king of the kitchen for flavouring practically everything but the versatility of the potato should also be celebrated. Sadly I think our love affair with the potato while strong in reality has waned in prose. 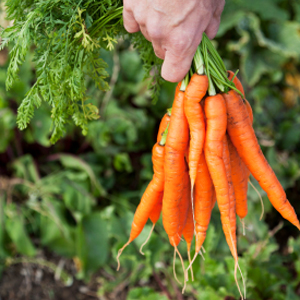 Perhaps it is because the potato (or the lack of them!) is associated with one of the darkest periods in Irish history that our modern cubs seem to disregard them. People generally love mashed potato, roast potatoes, chips and crisps and yet the general consensus from the health world is that they should be avoided. If we look a little more closely the spud isn’t the problem, but how we cook them. It is well worth mentioning that potatoes are a very good source of nutrients. Potatoes make it easier for the body to absorb protein; much easier than the digestive efforts of breaking down complete proteins in meat and dairy. Potatoes are a good source of potassium and are rich in Vitamin C and B6. They contain essential amino acids, are considered to be antioxidant dense and some varieties even carry high amounts of folic acid. Oh yes, the spud is very good for you. In fact history tells us that potatoes were the main staple of indigenous South American highland natives for centuries. The Spanish grabbed a few and took them back to Europe and along the way discovered that eating potatoes prevented scurvy. As a crop potatoes also have a lot going for them. Lots of potatoes can be grown in a small area and so are popular with GIY enthusiasts. You can even grow edible potatoes in patio containers and window boxes.

And so we know that the potato began its journey in the highlands of Peru and is considered one of the oldest vegetables on the planet. However it is only in the past 500 years or so that it has become rooted in European and North American culture. According to spud history, ancestors of the legendary Incas were the first to cultivate potatoes, high up in the South American Andes. It is believed that they held strong beliefs associated with the potato and used them as a means of telling the time and, even, predicting the future! According to one report that I read potatoes were so important to the people of this region that their descendants have more then 1000 different names for potatoes in their native language today. It wasn’t until the 15th century that the Spanish explorers returned with these ‘exotic’ foods to mainland Europe. Legend has it that later that century Sir Francis Drake stopped off in Colombia and stocked up on potatoes for his long voyage home from the Caribbean. It is thought that Drake gave a few left over spuds to Sir Walter Raleigh, who planted them on his estate in Youghal and some time later Raleigh presented Queen Elizabeth I with a gift of potato plants. Unfortunately her cooks had never even seen a potato before and made a meal out of the stems and leaves rather than the tuber (root). The dish made the royal family quite sick, with the result that potatoes were banned in England for one hundred years. It actually became a very unpopular crop, widely regarded as a food fit only for peasants and animals. Yet the peasants discovered how versatile it was and ingeniously made several delicious dishes that endure today. It was Marie Antoinette who finally popularised the plant in the 18th century, by wearing potato blossoms in her hair. Potatoes became all the rage, and they rapidly became indispensable to all sectors of society.

As it happens Ireland was the first European country to cultivate potatoes as they were ideally suited to the cool, moist climate here. Unfortunately, as we all know, under British rule we produced an abundance of food for export while our own people were left overly reliant on the potato and disaster struck when the crop failed causing more than one million people to starve to death during the famine. It is a very sad period of our history and astonishing that a land like ours, so rich in food production and steeped in food heritage should ever have faced a food crisis.

Interestingly while potatoes were first brought to North America in the 1620s, it is believed that it was the post famine Irish settlers in New Hampshire who, hungry for a taste of home, first cultivated the crop. As Irish immigrants continued to flock to America, increased demand for potatoes led to the establishment of a thriving potato industry. Today in America the potato is reported to be the nation’s favourite vegetable.

The difficulty with the potato is that we sometimes fail to experiment properly. We are happy to mash, bake, roast or chip them but what about all the great French inspired potato dishes? I love gratins, dauphinoise or boulangere – all rustic dishes with peasant origins that are delightful and comforting. Try grating them to produce rosti, latkes, or how about ‘pommes paillasson’ which are basically a fried potato based pancake. The Spanish frittata would be nothing without the spud and many a one pot meal can’t do without it as a topping. There are literally hundreds of websites with as many ideas on how to cook the humble spud. Indeed there is an irony in that title as I often think the unassuming, humble spud is really a royal member of any cook’s arsenal. I welcome your feedback to pat@jwb.ie