With the annual pancake fest just behind us and a general feeling of spring in the air it is the perfect time for a little shift in gear and preparation for the lighter days that are now, at least, on the horizon.  The idea behind having pancakes on Shrove Tuesday came from the need to clear out the eggs, fat, flour and sugar just before the start of lent when the consumption of such was traditionally restricted during the associated ritual fasting.  Today Pancake Tuesday is simply about the indulgence in pancakes but I think we should rethink this period and have our own modern day clear out.  Not because you want to go off anything in particular for lent, but because the amount of food we have stashed in the back of cupboards and at the bottom of the freezer is quite remarkable. 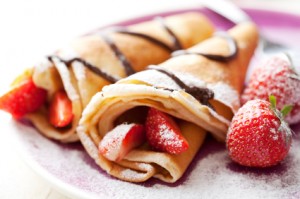 At least once a year store cupboards and freezers should be thoroughly purged.  It is a good idea to try eating from the freezer for a week in order to clear out or at least run down the stock.  I understand it could mean a week of pot luck and given that the average house hold freezer always contains at least one or two unlabelled (and probably unidentifiable) items, it is both a challenge and a risk.  This type of ‘shopping your own house’ can dramatically improve imagination with your cooking.  It lends itself to trying new combinations and adding unusual ingredients to standard recipes.  At a time when everyone is conscious of value and cost, the virtuous feeling in using up things from the cupboard is highly rewarding.

A few weeks ago in this column I also mentioned in passing that a new survey suggested the slow economy was also prompting a new found interest in old fashioned gadgets such as pressure cookers and crock pots.  It came as no surprise therefore when I opened the recently published March issue of Good Food that they had devoted a whole page to slow cookers and their merits.   I have always advocated long slow cooking as an ideal way to get the best from the more inexpensive cuts of meat but I’m only a recent convert to the actual electric crock pot.  They are relatively inexpensive gadgets, very elegant in design as the settings are simple and practically fool proof and not only do they work well with cheaper foods they are also very energy efficient.  What’s not to like?  On average to cook a meal in a crock pot uses less than a third of the energy of a traditional oven.  The other good thing is that most slow cooker recipes are very quick to prepare and the units themselves are designed so that you turn them on and leave the house for several hours. 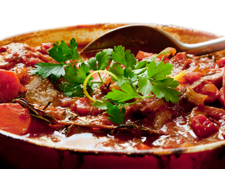 My personal tip with red meat and slow cookers is to brown the meat before putting it in the slow cooker.  This is an extra step but if you don’t, you may have to add gravy browning as food cooked in a slow cooker is usually pale.  Corn flour is the best way to thicken sauces and if you want to add cream or crème fraiche don’t do it until the last minute.  I would also recommend that you buy a slow cooker with a glass lid as removing the lid frequently during the cooking process can slow it down considerably.  With a slow cooker all the preparation is done at the beginning of the day so all that is left to do after a hard day’s work is to serve it up.  The other notable difference with cooking in a slow cooker is that the liquid doesn’t reduce as it does when cooking on a hot plate.  For this reason if you are adapting non slow cooker recipes for the slow cooker always reduce the liquid needed by about a third.  All in all they are great for busy people and they can transform cheaper cuts of meat into something really special.  The other night I cooked a ham in coke with onions.  I left it for 8 hours and the result was melt in the mouth delicious.  Recently I’ve cooked lamb shanks with wine, a slow cooked bolognaise and a spiced butternut squash and sweet potato soup worked out even better than expected.  Okay you have to be a little organised and allow that time in the morning for the preparation before you do anything else but the lack of effort at the other end of the day when energy stocks are depleted make it all very worthwhile.  It’s also quite a healthy way to cook as there is little or no extra fat ever added.  As a general rule of thumb recipes such as casseroles, stews and braises are most suited to slow cookers and the long cooking time really allows the flavours to develop.